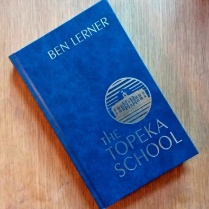 Some odd choices this week.

First up is We Are Made Of Diamond Stuff by Isabel Waidner. Shortlisted for the Goldsmith’s Prize for experimental fiction. This slim novel, set on the Isle of Wight,

‘collides literary aesthetics with contemporary working class cultures and attitudes…,works with themes of empire, embodiment and resistance, and interrogates autobiographical material including the queer migrant experience.’

Phew! Is this meant to be ironic? Whatever it is, this could be either a work of genius or pretentious academic onanism. At least it’s short so I’ll know soon enough.

Ben Lerner’s ‘The Topeka School’ has had some great reviews with lots of wittering about psychological sensitivity, the ‘identity crisis’ amongst white men and ‘toxic masculinity. Hmm…

Finally, Mary Costello’s ‘The River Capture’ which has had great reviews with references to James Joyce, ‘love, loyalty and the raging forces of nature‘, and all wrapped up in the story of a man returning to his family home to meet a woman who presents him with ‘an almost impossible dilemma.‘

I really want all of these to be great and I paid good money for all them but maybe (with, perhaps, the exception of Mary Costello) I’ve fallen for the hype…or perhaps it might be just the dark winter nigh

ts pushing me towards something warm and comforting…

…and, as if by magic, a new book by John Waters appeared!

John Waters had a long career making films, initially cheap, vulgar and very, very funny films starring his gang of misfit friends from Baltimore. ‘Pink Flamingoes’ became a cult success, being the story of ‘the filthiest person alive’, and becoming a success de scandale as the star of the film, Divine, ate dog poo in reality for one scene. Waters would eventually write and direct the original, non-music version of ‘Hairspray’ as well as classics (well, at least to me) ‘Female Trouble’, ‘Serial Mom’ and his final, film, ‘A Dirty Shame’. That last film came out in 2004 an

d since then Waters has produced books, had exhibitions of his art works and toured extensively with his one man show, ‘This Filthy World’. John Waters is a VERY funny man.

‘Mr Know It All’ is a sort of semi-sequel to his book ‘Shock Value’ which ended just before he made his first foray into a ‘studio’ film (as opposed to cheap, independent films), ‘Polyester’ (which, fact fans has just been reissued by Criterion and includes a ‘scratch and sniff’ card for added viewing pleasure!?). It also has a number of others essays on, amongst other subjects Andy Warhol, his ideal Brutalism home, his one-man show, death and gay activism…

‘It’s illegal to be gay in seventy-six countries around the world. Isn’t it time for us to borrow a slogan from that new ‘black bloc’ militant faction of protestors, Disrupt J20? ‘We will go to war and you will lose!’. That’s right. Don’t we need a comic armed conflict over sexual preference? Our guns may shot blacks but out tongues are lethal. We will kill you with humor… our vindictive and volatile gay army would, in a surprise air raid, plunder the Middle Eastern capitals of homophobia (Pakistan, Saudi Arabia, Syria) by dropping tens of thousands of pamphlets explaining in their native language the bear community, gay marriage, Walt Whitman followed by Bruce Benderson novels, Mommie Dearest DVDs and the complete recording of Judy Garland.’